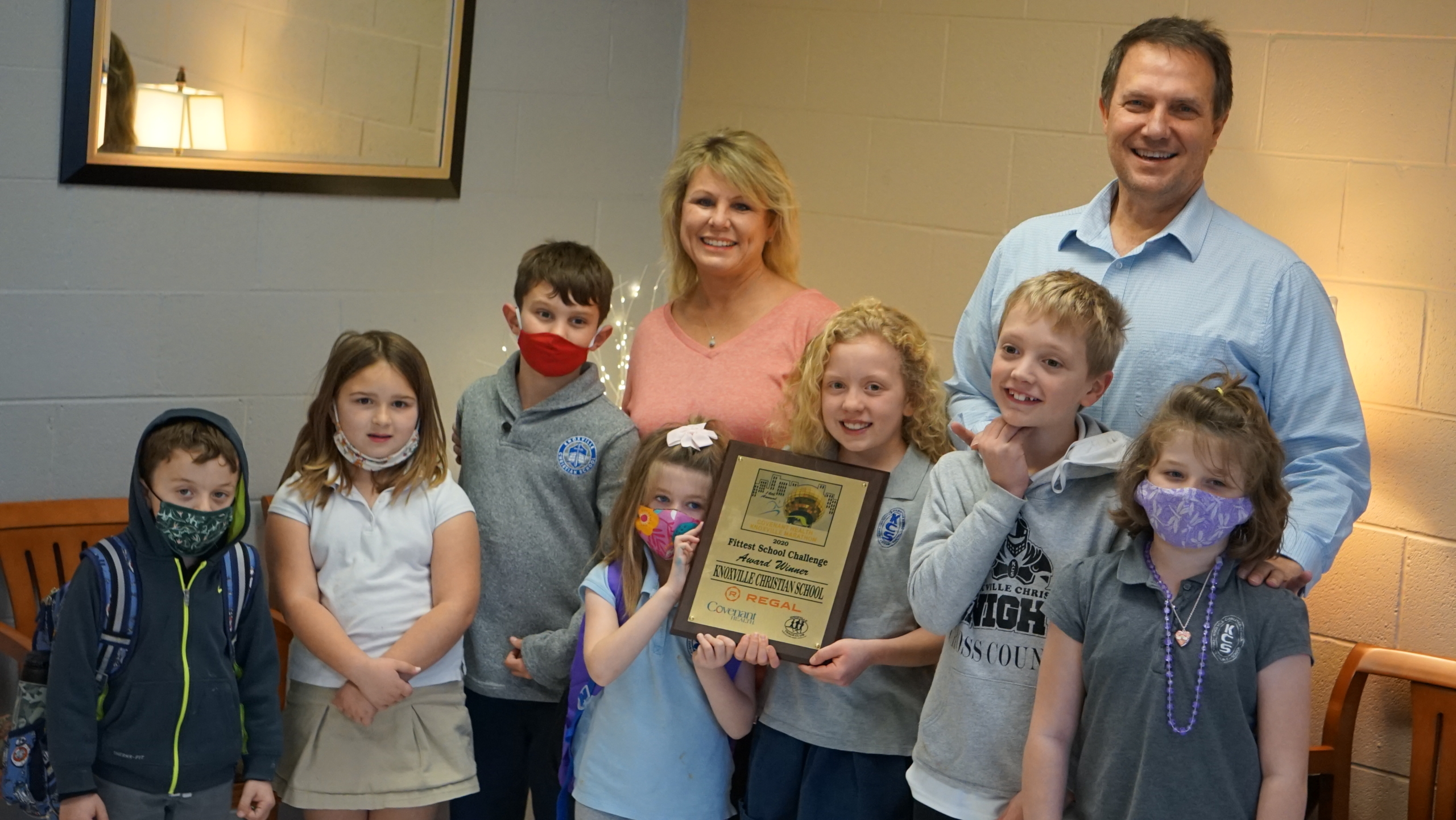 In January of 2020, several Elementary students, along with Mrs. Lawson (2nd grade) and Mrs. Williams (first grade), formed a “Run Club” for K – 5 students. The club entered to compete in the Covenant Kids Run.

The Covenant Kids Run is a program created to encourage kids to lead healthier and more active lifestyles. The children that participate in the run would run a total of 25 miles leading up to the race. On race day, they would meet in-person to run the final mile together, totaling the distance of a full marathon, which is 26.2 miles.

The run was originally scheduled for April 2020 but, due to the COVID-19 pandemic, it was postponed and eventually went virtual. Up until Knoxville Christian School’s brief school closure in March and April of 2020, the Run Club would meet twice a week to log their miles, with the option to run or walk. When school closed down after Spring Break last year, students continued logging their own miles at home.

In addition to the student’s efforts to get “fit” at home, they registered for the “Fittest School Challenge.” Schools all across the area were ranked in the “Fittest School Challenge” based on their overall participation and categorized based on school enrollment size. Knoxville Christian School was placed in the small school category with many other schools in the area – a category they ended up placing 2nd in! Not only was the Knoxville Christian Run Club awarded a plaque for ending up in 2nd place, they were also presented with a check for $750 to go toward KCS’ Physical Education program! Way to go! To view the 2020 “Fittest School Challenge” rankings, visit https://knoxvillemarathon.com/covenant-kids-run/.

The 2020 “Fittest School Challenge” participants were:

TOP SELLERS WILL BE REWARDED

For every person who sells at least 2 boxes: You will be brought a Chick-Fil-A lunch and have extra free time to enjoy it!

TOP SELLER PRIZES WILL BE ANNOUNCED

**We accept cash or check, when turning in your $60 with each envelope. Envelopes are to be turned in to the student’s homeroom or 1st period teacher throughout the fundraiser. Make sure checks are made out to ‘Knoxville Christian School.’

You’ve probably noticed our new sign at the entrance of campus! The sign, which displays our new logo, was put up a week ago thanks to donations we received back in October of 2020. In October, we held a silent auction at our annual Fall Festival, which was the event that allowed us to raise over $1,100 to go toward the sign. Thanks to our friends, families & supporters, who helped raise the money, we were able to have the new sign constructed last week, where it will stand to welcome all of our new and returning visitors! The overwhelming support we received at the Fall Festival helped to remind us about just how blessed we are to be one of the best private schools in Knoxville, Tennessee!

On Thursday night (10/1), the Middle School Flag Football team won the league championship against Berean Christian School! The Knights were down 12-0 at one point in the game but with a nail-biting comeback, the game resulted in a final score of 19 to 18!⁣⁣⁣

The following players earned these honors after last night’s win:⁣⁣

Junior Lady Knights Volleyball star, Karson Brock, was recently recognized on the 2020 American Volleyball Coaches Association (AVCA) Phenom / Under Armour watch list. Athletes that are named to the highly respectable list are also invited to attend the AVCA Phenom College Preparatory Program, which will be held in Omaha, Nebraska from December 17th – 19th this year.

Though it may be uncommon to get invited to such an event, this invitation was no surprise to Lady Knights Head Volleyball Coach and Karson’s father, Walter Brock. This year, Karson was made team captain, not only for her athletic prowess, but also for her knowledge of the sport and her leadership abilities.

“She’s always trying to help kids learn to be better,” Coach Brock explained, “she’s like having another coach on the court; she really knows what she needs to do without me having to tell her.”

Due to the event taking place in Nebraska, Karson was a little shocked to find out they invited her to participate in the elite program.

Getting an invitation to this event is a very high distinction in the world of high school volleyball, as it recognizes only the top athletes in the country for their outstanding abilities on the court. Coach Brock shared his thoughts on the significance of this event.

“It helps get her name out there. It helps showcase that she’s one of the top players in the country.” Coach Brock explained. “When you go to the camp [AVCA Phenom College Preparatory Program], they teach you things to get you prepared for the next level, it’s quite an honor.”

At the invitation-only event, athletes will have the opportunity to participate in informational sessions about life as a student-athlete, athlete-led panel discussions, individual player assessments and more! Athletes, like Karson, will also be given the opportunity to demonstrate their talents on the court in front of 200+ collegiate coaches.

Karson has a lot to look forward to this December, when the program is set to take place.

Karson has been eyeing several Division 1 colleges, including Cincinnati and Ohio State.

Even though the Lady Knights are still early in the season, Karson has already racked up some pretty impressive statistics with 108 kills, 74 digs, 42 aces and a 2.56 passer rating.

The team’s record, so far, is 8-3, with a couple of big matches coming up this Thursday night against Trailblazers and Daniel 1 Academy. View the remaining 2020 Knoxville Christian School HS Volleyball schedule here.

For more information on the Phenom College Preparatory Program or to get updates on this year’s event, visit https://www.avca.org/events/phenom-program.html.

This week, we welcomed our students back onto campus! We are so excited to have them back, along with over 50 new faces!

Following are a few brief updates relating to our first day of school and beyond.

1. Students aged 18 months – 5th grade will go to the elementary building. This is the building on the left when you arrive on campus. Parents bringing students aged 18 months – PK 4 will be allowed to park in the parking lot (not in the drop off car line) and bring students inside. All individuals entering the school must have a mask on, and will be subject to temperature scan and health questionnaire. Parents of 18 – 36 month students will proceed outside of the building to the classrooms facing Snyder Road. Parents of PK3 and PK 4 will enter the main doors. Students in K – 5th grade will get out of vehicle with backpacks, etc. in order to have temperature scan and health questionnaire. Please do not leave until your student has been cleared to enter.

3. As a reminder, following are the questions on the Health Questionnaire. You are responsible to asking the questions at home as well in order to monitor your student’s health.

On Saturday, May 9th, 18 seniors graduated in Knoxville Christian School’s Class of 2020! Congratulations to all of our graduates!

The graduation was live-streamed and can be viewed here: https://tinyurl.com/kcsgrad2020.

Knoxville Christian School has prepared a Distance Learning program that we will implement starting Wednesday, March 25 until we are able to hold classes as normal again. This process is a work in progress, and we are expecting to deal with some difficulties as we work through it. Our IT Director, Mr. McDonald has done a tremendous job of getting us to this point; and the teachers are excited to continue school.

Classes will meet via electronic classrooms for a planned 53-minute period, however that will not be the case with every class. If a teacher completes the Lecture/Discussion, Question and Answer period and any other group class work, they will dismiss the students from the online class to complete any readings, assignments, etc.

If a student has difficulty accessing a Distance Learning application, please contact KCS Tech Support on the KCS Discord page, or as a last resort Mr. McDonald for assistance at [email protected]   If a student is having difficulty or has questions about a class or an assignment, contact the respective teacher via school email. All class work and assignments will be turned into the teachers by students using the school email system. Grades will continue to be posted in RENWEB/FACTS. Lesson plans, readings, class work, assignments and other class specific information will be posted in RENWEB/FACTS.

With the recent global spread of the coronavirus (COVID-19), it is best to take precautionary measures by washing your hands regularly to help prevent the virus from spreading even more. Below, are some tips on hand-washing from the CDC (Centers for Disease Control & Prevention).

Germs are everywhere! They can get onto hands and items we touch during daily activities and make you sick. Cleaning hands at key times with soap and water or hand sanitizer is one of the most important steps you can take to avoid getting sick and spreading germs to those around you.

There are important differences between washing hands with soap and water and cleaning them with hand sanitizer. For example, alcohol-based hand sanitizers don’t kill ALL types of germs, such as a stomach bug called norovirus, some parasites, and Clostridium difficile, which causes severe diarrhea. Hand sanitizers also may not remove harmful chemicals, such as pesticides and heavy metals like lead. Handwashing reduces the amounts of all types of germs, pesticides, and metals on hands. Knowing when to clean your hands and which method to use will give you the best chance of preventing sickness.

This past week was Dr. Seuss week and Read Across America week to encourage children to read more!

This week, our Elementary classes got to hear from several very special visitors who came by this week to read to them!

Among those visitors who came to read to the Pre-K – 5th graders were fireman Christopher Lawson, Farragut Vice-Mayor Louis Povlin and Judge Tim Irwin!

February is your month to commit early and get rewarded. All new and re-enrolling students committing to Knoxville Christian School can take advantage of a $250 Early Bird Enrollment Pricing through February 28th, 2021. 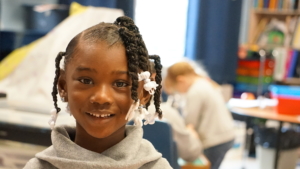