Mr. Paul Foster recently graduated with a Master’s in Wind Conducting at the University of Tennessee, Knoxville where he served as a Graduate Teaching Assistant within the Band Department of UT’s School of Music. His duties included conducting athletic and concert bands, assisting with undergraduate conducting classes, and working for The Pride of the Southland Marching Band. Before arriving at UT, Mr. Foster was Director of Bands at Port Allen High School in Louisiana. During his time at Port Allen High the Band of Blue competitive marching band remained undefeated as Class A State Champions, the competitive Winterguard won the Louisiana-Mississippi Colorguard and Percussion Circuit State Championship in their class, and the band program’s concert and jazz bands received Excellent and Superior ratings at district and state assessments. Prior to teaching high school, Mr. Foster received a Bachelor’s degree in Music Education from Louisiana State University in Baton Rouge, LA. He performed tuba in LSU’s concert bands, and performed sousaphone in The Golden Band From Tigerland Marching Band. He also holds professional memberships in the National Bandmasters Association, The National Association for Music Educators, and the International Tuba-Euphonium Association. Mr. Foster looks forward to growing the Knoxville Christian School Band Program into an essential and permanent part of the KCS community. Go Knights! 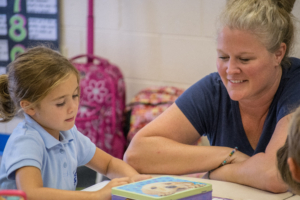